“Wait a bit, Tyek,” Farad’n said. “There are wheels within wheels here.”

Truth: Every downtrend is followed by an uptrend.

Truth: Every trend has smaller trends with it.

Those truths are evident at even a cursory glance of a stock chart.

Now that I’ve sold nearly all of my stock positions, I need to know when to start buying back in again. That means a rule. That’s the hard lesson I’ve during nearly 40 years of trading. I can’t rely on instinct, or hope, or fear. In the past those have led me to misjudge the markets, and sometimes those misjudgments have cost me dearly.

If the present downtrend was mainly caused by the coronavirus, then there’s not much of a rule needed. The CDC and World Health Organization will declare a tentative victory over the pandemic, we’ll all dance in the streets, the markets will start to rise, and the world will move on.

If the crash was caused by far more than the coronavirus outbreak, then the road back to trading stocks again is somewhat more complex.

Among the other contributors to the downturn are, I think,

The following chart shows SPY — the exchange-traded fund that tracks the S&P 500 — for the past three years, with each bar representing one day’s trading. (To increase the size, use Alt-plus on Windows machines or Command-plus on Apple machines, or open the image in a new tab, where it will quite readable.) 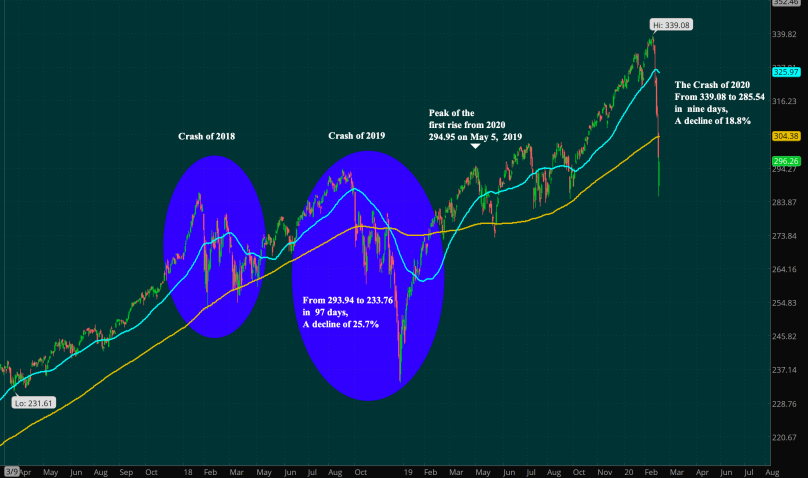 The crash this year is the third  in a series. We had a downturn in 2018, another in 2019 that lasted 97 days and went deeper, and now a crash in 2020 that in nine days has almost equalled the Crash of 2019. What has happened over the past nine days has been no small thing. And my job as a trader is to identify the markers that might show when the initial drop is finished, and whether that reversal means a reversal of the entire decline.

But those tools address only the initial decline, and a glance at the 2018 and 2019 crashes suggests that it’s never as simple as an unrelenting decline followed by happy days.

At this point, Elliott wave theory comes into play. Long-time readers will remember that I’ve used Elliott waves before to gain an understanding of likely paths the market might trace. I find it to be extraordinary useful. I also find that it has ambiguities, so I treat its conclusions as tentative and am always ready to revise my opinion on the basis of new information. Fans of statistics will recognize this as an non-mathematical application of the Bayesian method.

In Elliott wave theory, a market movement consists of five waves — three in the direction of the trend, separated by two counter-trend movements. The peak before the present crash clearly marks the end of a five wave uptrend from the low point of the crash of 2019, suggesting more decline lies ahead. If stocks rise, then I would interpret them — using Elliott — as being counter-trend movements within a larger downtrend.

For market trends are fractal. The movements of a five-minute chart are components of the larger movements seen in the daily chart, and all the way up fractal the ladder to the very, very large movements of a quarterly chart, such as I used in yesterday’s post.

The current decline is clearly a first of the five waves in a downtrend. What happens next is a zig-zag correction back toward the February 19 high, but it will fall short of that level. It could well take the shape of a sideways movement, which means less of a rise.

That wave, as with all trending waves, must be subdivided into five waves. As I read the chart, wave 1 down shows a subdivision into five lesser waves, with the 5th ending with Friday’s 285.54 close. Perhaps. That interpretation will be scrapped if the downward move continues on Monday. This is where the ambiguity comes in.

When the 5th wave within the 1st wave of the decline is complete, then wave 2 will begin. One firm rule in Elliott wave theory is that a 2nd wave of a trend cannot exceed the trend’s starting point, the beginning of wave 1. In this case, that means SPY can’t exceed 339.08. If it does, then all bets are off. Something else is happening, scrap the analysis and start anew.

And of course, it’s not yet clear where on the ladder of trends this initial decline resides. In Elliott, the rise up from the low point of the 2019 crash is called an Intermediate wave, and it lasted for months. The wave a step higher is called the Primary wave, and it tracks the rise from the low set by the Great Recession Crash of 2008/09. In past trading I’ve done best with the Intermediate wave when it comes to market trend analysis. I’ve used lesser waves in the past for individual trades.

And that’s Elliott in brief. I won’t be using the traditional moving average tools to dictate my re-entry into the stock markets. They simply aren’t nuanced enough to provide adequate guidance. So my re-entry will be dictated by Elliott.

And so, to the rule:

That’s it. All that talk and such a simple ruleset.

I shall continue to trade options, generally bear call spreads, and for options strategy shall rely on Elliott wave analysis for guidance.

One thought on “After the Coronavirus Crash — What’s next?”