“April is the cruelest month”, wrote the poet T.S. Eliot. 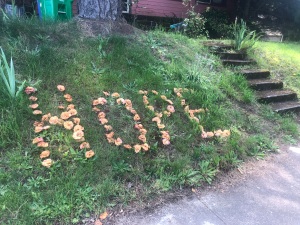 He was wrong, at least in this season of our discontent, cruel pandemic prompting cruel opportunities for bear trades that, in their May denouements, left the stage with cruel losses trailing like bloodstains in their wake. March was a month of hope. April was a month of diminishing expectations. May was the cruel month when hope shriveled to a parody.

I entered the three options positions mere hours before they reversed to the upside, became hugely unprofitable and never returned to that sweet shore of profitability.

Was it a whipsaw for the record books? A black swan that defied anticipation? A failure of R.N. Elliott (no relation to the poet) to anticipate Elliott waves so lacking in clarity that they defied the trader’s ability to count?

It is my practice, after a major loss, to try to understand what I can learn from it, to become a better trader and, I should hope, avoid being caught in the same trap again.

The mindset of the trader is the most important element of trading. Here’s where my head was when I entered the May options positions and how I reached that point.

The market peaked on February 19, and an opening gap on February 24, a Monday, made it clear to me that the market was crashing. I sold all of my shares position — all of them long — and immediately formed a plan to base my trading on Elliott wave analysis, abandoning the Zacks analysis that I had used in those bullish days before the crash.

I also decided to trade only derivatives of the S&P 500, since the entire market was dropping together and the index fund, SPY, was the most liquid symbol on the exchanges. For shares, I used SDS as a vehicle, a fund that moves in the opposite direction of the S&P 500, multiplied by two. For options, I abandoned the short iron condor structure that was my mainstay for years, switching to a short bear call spread structure, which was profitable to the downside and potentially unprofitable to the upside.

Throughout it all, I never felt as though it were Mardis Gras, “Let the good times roll”. Rather, for each trade I simply did my analysis and entered the position, or exited, by strictly following my rules and the message of the chart.

The next Monday, a breezy grey day with some rain, typical of Portland, Oregon at the outset of Spring, I booted up my laptop for the market open at 6:30 a.m local time ready to trade: Sell the options, buy them back a few days later, and do it again — rinse and repeat.

The May options were at their optimal trading point, 45 days prior to expiration. The chart showed a clear Elliott wave count: SPY, along with most of the market, was in its 3rd wave down of what was proving to be an epic downtrend.

I had free cash in several accounts. So I increased the size of my positions to put those extra funds to use.

The chart looked like this, and I remember thinking that I saw nothing that indicated a reversal from the downtrend. Instead, I saw the ups and downs that are characteristic of a market movement. 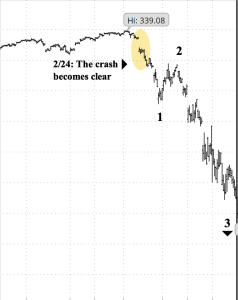 And so, at 9:43 a.m. New York time, where the vertical line provides the right-hand border of the chart, I made the first of three trades. The other two followed in quick succession.

I noted one potential contrary signal: Intermediate wave 3 by my count had gone on for 20 days, a bit long for that degree although certainly not unheard of.  Elliott wave analysis, like all market analyses, is weak when it comes to how long a wave will last. The waves don’t come with labels. And I dismissed the reservation.

The Rest of the Story

The S&P 500 gently undulated in a sideways trend for the next couple of hours, at 11:45 a.m. New York time, slipping down to 218.26. That point, two hours and two minutes after my first trade, marked the end of what proved to be Intermediate wave 5 and its parent, Primary wave 1. 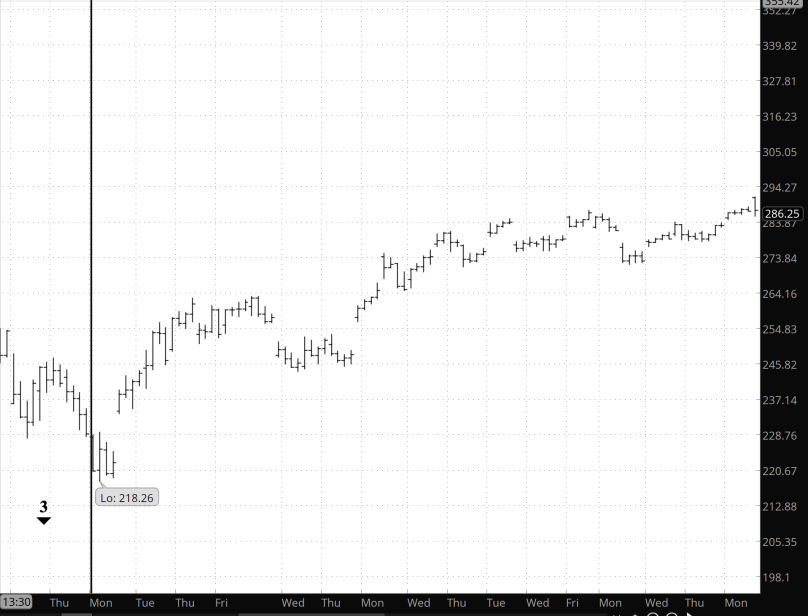 The next day, at the opening bell, SPY gapped to the upside, the chart equivalent of “Hey, look here! Things have changed.”

And indeed they had. Primary wave 2 had begun, an upward correction within the larger downtrend — a “corrective wave” in the parlance of Elliott — and it would maintain its grip for 38 days, rising 36% to its peak of 294.88.

My positions rapidly became unprofitable, reaching a point where it was cheaper to wait for expiration to exit rather than getting out right away. And wait I did, until May 15, expiration day, when I exited all three positions for significant losses.

“Look up and not down, look forward and not back, look out and not in, and lend a hand!”

Even now, in retrospect, I don’t see a clear signal from the chart saying the 3rd wave is over. There are several ways of counting — it’s ambiguous — but no count shouted out, “Abandon ship!” And I’m not alone. Professional analysts who earn their paychecks doing Elliott wave analysis didn’t see it coming.

So first of all, in lending a hand to my trading technique, I see no need for changes in my analysis. Elliott wave theory always deals with probabilities. It’s not a crystal ball. There are always ambiguities. This market turn was no different than others.

My holdings weren’t diversified. All of my options had SPY as the underlying symbol. I don’t think that lack of diversification contributed to the loss. The entire market in mid-March was marching in the same direction, and continues to do so to the present day. There was no diversity in the market behavior and so no diversification possible in the trades.

The outcome of the trade reveals a serious flaw in my trading rules for options. The optimal time to enter a spread position is 45 days before expiration, and that’s when I entered the May options positions. I adopted the 45-day standard from analysis done by Tom Sosnoff and his team at the online financial channel TastyTrade.

But by interpreting the standard so narrowly, I fell into a cliche, putting all of my eggs in a single calendrical basket. Imagine if I had spread things out, entering the first position 52 days before expiration, the second 45 days before, and the third 38 days prior. In the past I have gone as much as a week either side of the standard 45 days prior. I could have done it here, but didn’t. I wanted to get those trades in so they could profit from a further decline.

Another practice that would have helped with the damage: Keeping cash in reserve. By expanding the size of my positions — increasing my commitment of funds — I left myself without a means of mitigating the loss prior to expiration. If I had kept funds available, I could have offset the future losses by entering short put call spreads, which are bullish, earning an offsetting profit from the rise of Primary wave 2.

The positions discussed in this “Lessons Learned” study are short bear call spreads on SPY, lots 12, 13 and 14. The numbers link to the entry analysis for each position, updated with results.

The T.S. Elliott quote that leads the study is from his poem “The Waste Land” (1922)

A “mind meld” in the first section head is a reference to the Vulcan technique of mind reading in the Star Trek verse.

The section head beginning “Look up, and not down” is a quote from the American author Edward Everett Hale in his book Ten Times One Is Ten (1870).

4 thoughts on “My May Options Losses: Lessons Learned”