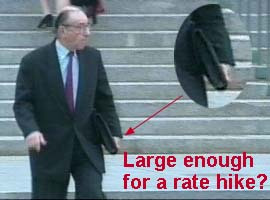 The Federal Reserve takes center stage this week, as Fed Chairman Jerome Powell testifies on the state of monetary policy before the Senate Banking, Housing and Urban Affairs Committee on Tuesday and the House Financial Services Committee, each at 10 a.m. New York time. It will be his second semiannual report to Congress.

We live in an age flooded with information about monetary policy. Far gone are the days when analysts speculated on the likelihoods of Federal Open Market Committee action based on how fatly the chairman at the time, Alan Greenspan, had packed his briefcase.

So the semiannual report is valuable in providing a big picture view of the forces that go into regulators’ thinking, but is a smaller piece of the speculative puzzle than it once was.

Two other major reports will pique trader interest during the week: Housing starts on Wednesday and retail sales on Monday, each at 8:30 a.m.

And there’s another event from Fedworld: Fed Vice chairman Randal Quarles will give introductory remarks, via pre-recorded video, at the Alternative Reference Rates Committee Roundtable of the New York Federal Reserve Bank, on Wednesday at 9 a.m. The Roundtable meeting will be streamed here.

The index of leading indicators, while not a leading indicator itself, compiles the leaders into a useful marker of where we stand in the economic cycle. It will be released Thursday at 10 a.m.

Monday: Retail sales and the Empire State manufacturing survey of conditions in New York, each at 8:30 a.m., and business inventories at 10 a.m.

Tuesday: Industrial production at 9:15 a.m., Fed Chairman Powell’s Senate testimony and the Home Builders housing market index, each at 10 a.m., and the Treasury’s international capital report, tracking capital flows into and out of the country, at 4 p.m.

Thursday: Jobless claims and the Philadelphia Federal Reserve business outlook survey of conditions in the mid-Atlantic states, each at 8:30 a.m., the index of leading indicators at 10 a.m. and the M2 money supply at 4:30 p.m.

I also keep an eye on the Baltic Dry Index, updated daily, and the 10-year implied inflation rate based on U.S. Treasury yields.