By my  Elliott wave count, we’re at a turning point in the counter-trend rise that began April 2.

In the chart below, I focus on the final wave, a 5th wave of the Minuscule degree {-4}, and it’s internal waves, at a level so small it lacks a name. Let’s agree to call it the “Tiny”. By my count, SPY is in the 5th wave of the Tiny degree {-5}.

The chart covers Aug. 1 to the present, with 5-minute bars. 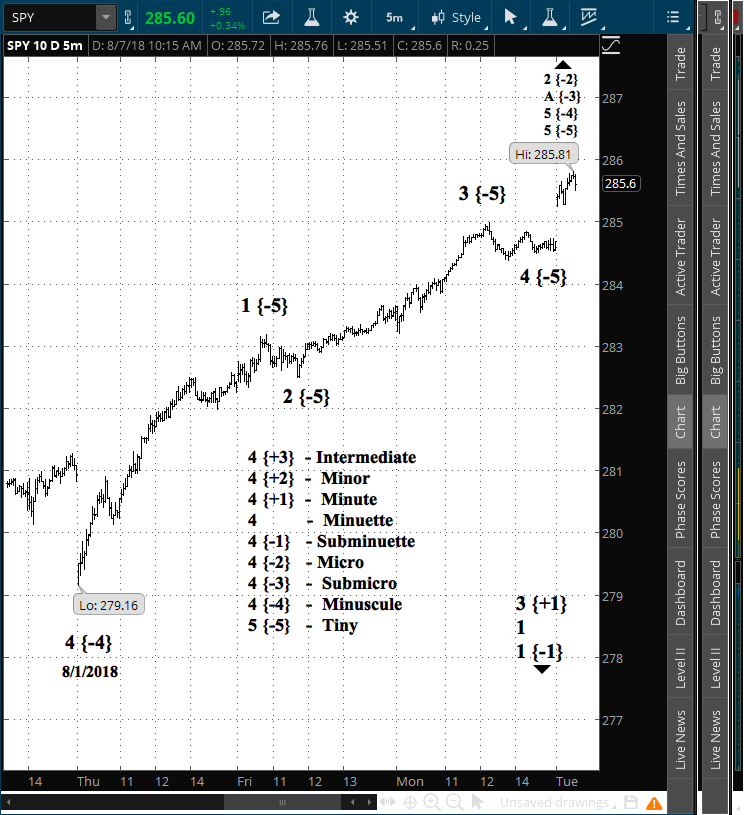 By “turning point” I mean that the first leg of the counter trend correction, the A wave of Submicro degree {-3} is nearing completion, to be followed by a downward B wave, which often has three waves internally, and then a C wave to the upside that will complete the 2nd wave of Micro degree.

The proper identification of degrees is always a matter of ambiguity in Elliott. But for my purposes what counts is the relationship among the waves — how far along as the price movement progressed. In that latter respect Elliott wave analysis can be made with great confidence.

My present position expires Aug. 17. It is loss-making at this point. Given how far advanced the A wave is, the rational choice is to delay until the last possible moment before getting out.

Or as the Earth-child raised by Martians, Valentine Michael Smith, put it in Robert A. Heinlein’s 1961 masterwork Stranger in a Strange Land, “Waiting is.”

Based on a work at www.timbovee.com.L