It has been an interesting ride, the past few days, as the trees begin to blossom, the hay fever pollen begins its disruptive whirl, and the stock market trips on a rock and falls off a cliff.

The Coronavirus Crash of 2020, young though it is, promises to have a large impact on the economy, our politics — on how we feel about our lives.

But a look at the long-term chart shows that, so far at least, it’s no big deal. 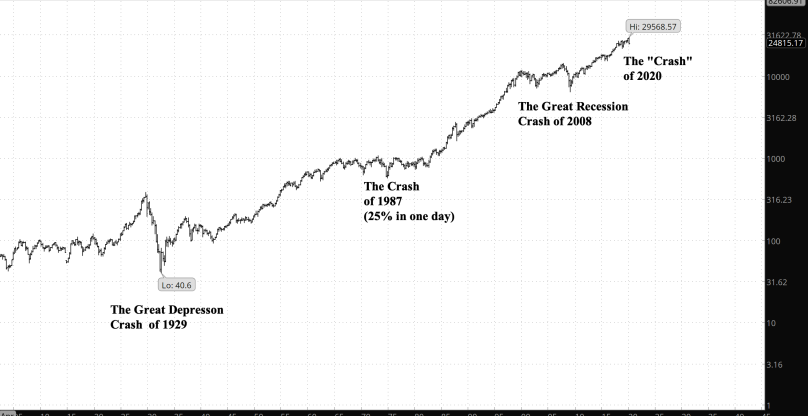 The chart above shows the Dow Jones Industrial Average from 1906 to a few minutes ago today. The chart is logarithmic, meaning that it accurately shows percentage change. Compared to the Crash of 1929 or the Crash of 1987, or even the Crash of 2008 that kicked off the Great Recession, which broke our world and stunted the prospects of a generation, our Coronavirus Crash of 2020 so far is barely visible.

Yet, there’s a less hopeful lesson to be drawn from the chart. The markets have been on the rise since the Crash of 1929 hit its low point in 1932.

One reality of the markets is that what goes up will eventually go down. No trend lasts forever. So the possibility exists that the decline from the market high of a few days ago is not just a correction of the last market rise, but rather is a multi-year, perhaps multi-decade correction of the rise from 1932.

Of course, any decline of that magnitude would have long uptrends within the dominant downtrend. So we would still have bull seasons and bear seasons. Life, and trading, would go on., although perhaps with less optimism than we’ve seen in the past 88-year-long bull market that began in the Great Depression.

Note: I don’t attribute the downturn solely to the COVID-19 (coronavirus) pandemic that appears to have begun. I think there are a lot of factors at work, including a full decade of economic growth, without a recession. Business downturns tend to happen more often than that. The consensus has been developing for months that it’s time for the economy to shed some of its optimism. If I’m correct, then we could be in for a significant decline. If I’m not correct, then, let the good times roll.

2 thoughts on “Just to put things in perspective…”