Chart analysis is much like the old-time serial films they used to show in movie theaters, where each episode ended with a cliff-hanger, and the kids had to shell out their nickels again to see what happened.

Having revised my longer-term Elliott Wave analysis of the SPY chart from the Jan. 26 beginning of the bear market, I took a deeper dive into components of the uptrending 4th wave of Minute degree {+1}, which began June 27. 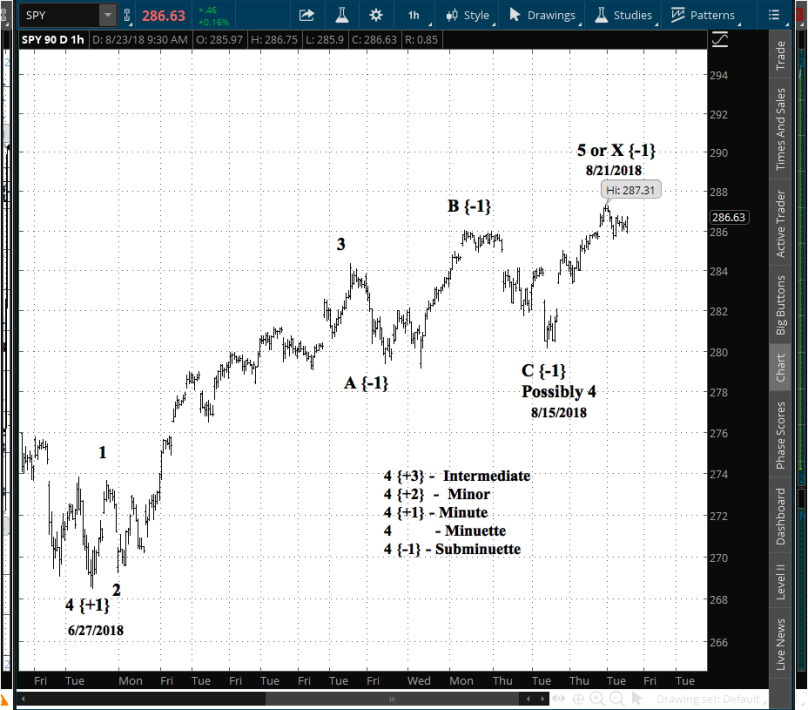 The interesting part is the leg up beginning Aug. 15, a movement that has much ambiguity. A straightforward count shows the C wave down of the Subminuette degree {-1} ended on Aug. 15.

If that wraps up the countertrend correction then that is also the end of the 4th wave and we are now pushing upward on the 5th and final wave of the C wave of Minute degree that began in April. (See the chart posted yesterday.)

However, the subsequent upward move could also prove to be the separating wave of a complex correction, with several zig-zags or flats or other corrective patterns linked to together. In Elliott, the separating waves are labeled X, and in this case it would be an X wave of Subminuette degree.

If the upward move from Aug. 15 is a 5th wave, then it will mean continued upward movement to a greater or lesser extent, followed by a significant down move, wave 3 of the Intermediate degree {+3}.

If the upward move is an X wave, then it has likely completed most its rise, and what follows will be a downward move, but not a major one, with a lower boundary on SPY in the $270s or so.

Bottom line: We don’t know which it will be. It’s a cliffhanger. We’ll need to pony up our nickels to see the next episode.

Based on a work at www.timbovee.com.L