A reworking of the count within Intermediate wave C of Primary 2. It takes care of the malformation in the count that I referred to below. The new count sees Minor wave 5 of Intermediate wave C as an extended 5th wave.  Extended 5ths aren’t as common as extended 3rds, but I have certain seen them in my work with charts. An extended wave has nine subwaves, in this case of the Minuette degree. By my count we are in Minuette  wave 8 to the downside, to be followed by wave 9 to the upside, completing the Intermediate C wave. 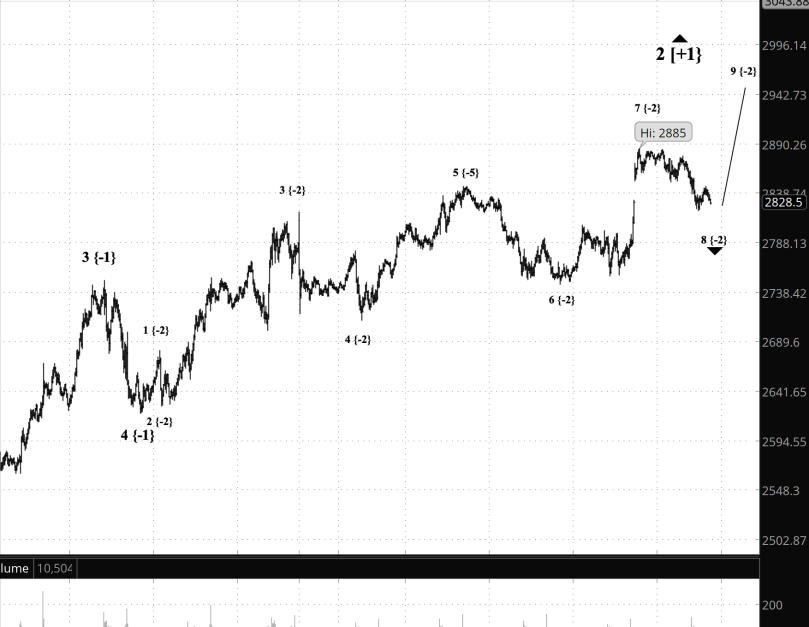 What’s happening now? The S&P 500 reversed its decline and moved above the previous high of the rise that began March 22. 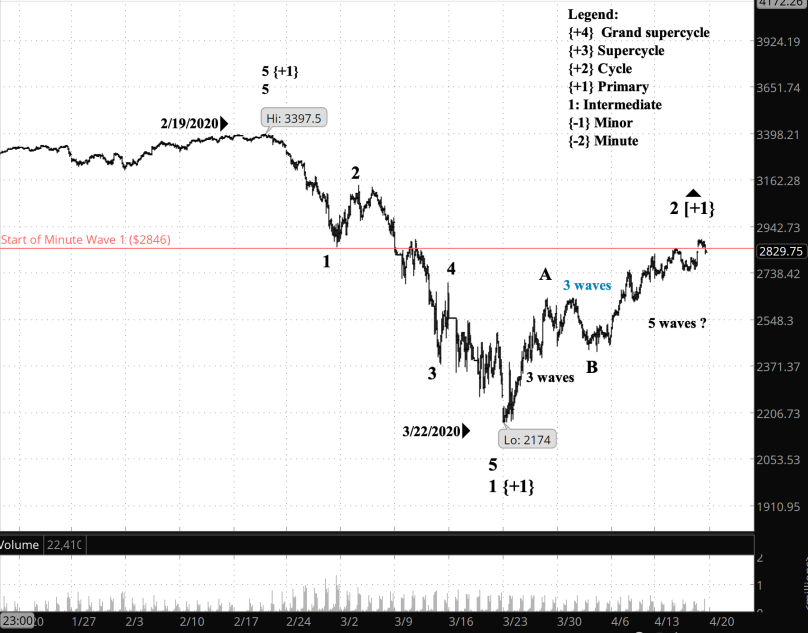 What does it mean? The upward correction of the larger market decline that began February 19 is not yet complete.

What does Elliott wave theory say? The alternative that I’ve outlined in prior posts turns out to be an accurate description of the course the market has taken. Wave 2 {+1} of the Primary degree is still underway. Wave 3 {+1} has not yet begun.

Just after the closing bell the price gapped above 2846, the start of the Minute degree 1st wave within Intermediate wave C. At the Minor wave level, that broke one of the firm rules of Elliott wave analysis: If a wave moves beyond the start of wave 1, then it’s not a 2nd wave.

Honestly, the count within wave 5 {-1} that’s now underway seems a bit malformed. At this point in the market’s progress, however, it’s the best I’ve got.

What is the alternative? We could be dealing with a combination correction that I have not yet puzzled out, and I don’t have a rule for confirming or rejecting the alternative at this point. As Valentine Michael Smith in Robert Heinlein’s Stranger in a Strange Land put it, “Waiting is.”

What about my trades? My positions expire on May 15, which is 28 days away. They are all out of the money, which places them at maximum loss at expiration. At this point I have no choice but to hold on to the three lots of short bear call options spreads on SPY: Lots 12, 13 and 14. If wave 4 extends in a combination correction, then I will have a greater chance of loss on the positions. If wave 4 ends quickly and declines into wave 5, then I I have a greater chance of profit.