What’s happening now? In after hours trading the S&P 500 bounded off of the 61.8% Fibonacci retracement, fell back down to the lower Fibonacci level, 38.2%, and then climbed back toward 61.8%, falling short of its prior rise.

What does it mean? This could be the end game for the rise that began on May 3. Or maybe not. Given the state of the chart, I’m unable to see a definitive way forward for the near term. 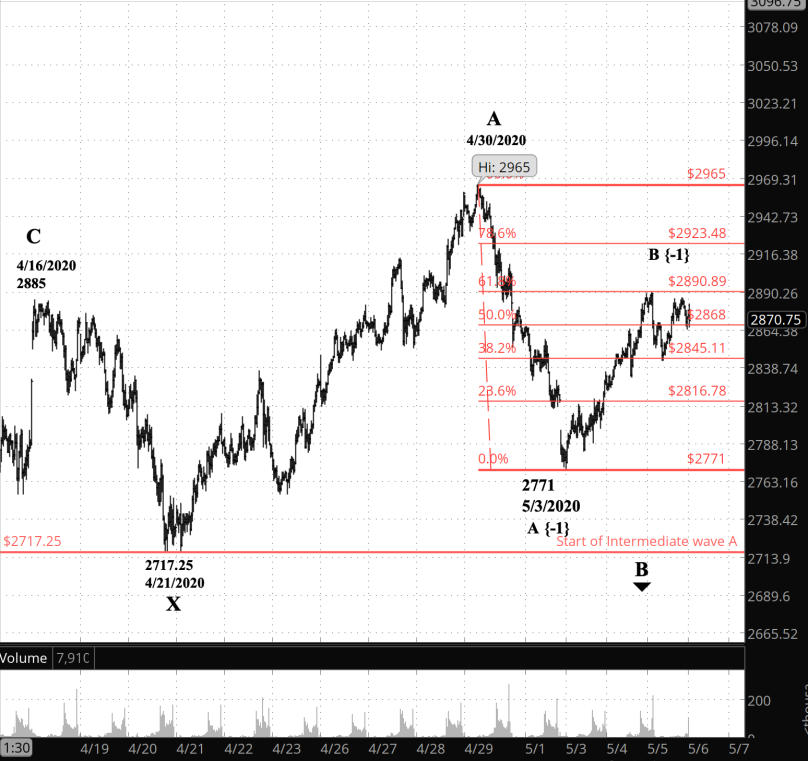 What does Elliott wave theory say? Minor wave B, which began on May 3 at 2771, has met its requirements. Whether it can continue to rise depends upon whether it has traced three subwaves. I can count it in a way that shows that it has, but I can also count in a way the shows that it hasn’t. As is often the case with Elliott wave analysis, conclusions are more a matter of probability rather than certainty. The big picture is clearer: Minor B will be followed by a Minor C to the downside, which will complete Intermediate wave B and which will be followed by an Intermediate wave C to the upside.

What is the alternative? It’s possible, although I think it’s a low probability, that the peak attained on April 30 ended Intermediate wave C, and the subsequent decline was the start of Primary wave 3 to the downside.

What about my trades? The downward movement Minor wave C will be my last chance to make a profit on my three short bear call options spread positions on SPY: Lots 12, 13 and 14, all expiring May 15. (The lot numbers link to the entry analyses.)