What’s happening now? I will confess, the little sideways track of the E-mini S&P 500 futures, looking like a snail’s trail, has left me in analytical uncertainty. So let’s pull back to what we do know. The S&P 500 has one more push to the upside before the correction has run its course.

What does it mean? The unknown is the form the rest of the correction will take. It has already stretched out over time, and the upward push could be followed by more of the correction, or a significant decline that will drop below the starting point of the correction, 2174, on March 22. In any case, the price will remain below 3997.50, the level that saw the beginning of the crash on February 19. 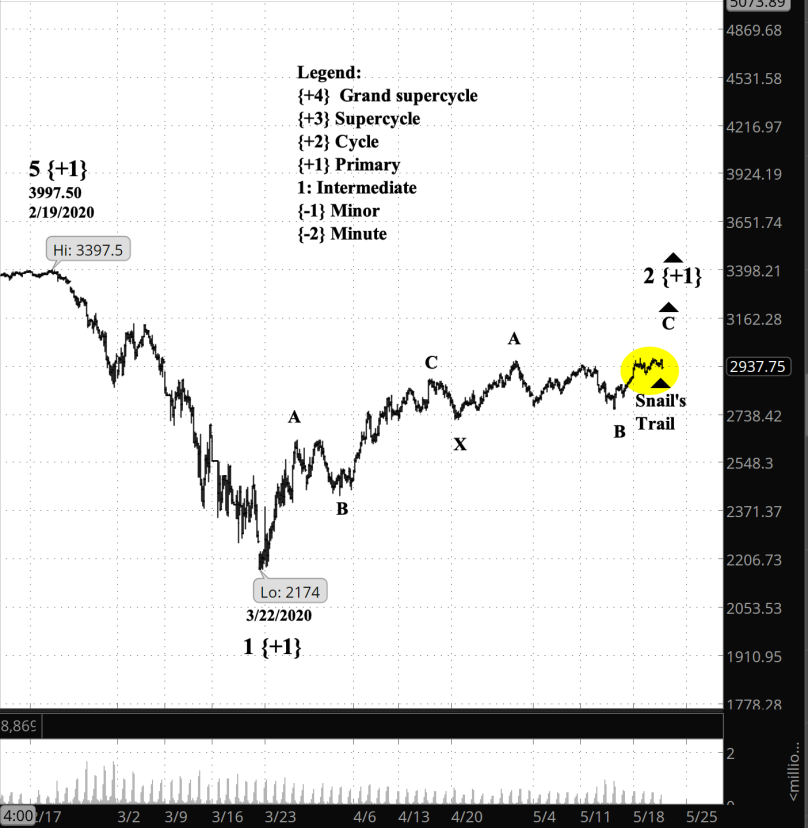 What does Elliott wave theory say? The present correction is wave 2 of Primary degree and, unusually for a 2nd wave, it has traced a combination, composed of a Zigzag followed by a Flat. Completion of the present wave C of Intermediate degree will either mark the end of Primary 2, which means the start of Primary 3 and powerful decline, or extend the correction with yet another corrective pattern, which means more upside. Can’t say which at this point.

What is the alternative? The third possibility comes into play if the unthinkable happens, and the present Primary 2nd wave moves above the start of the Primary 1st. As my cheatsheet of Elliott rules puts it, “If the wave moves beyond the start of wave 1, then it’s not wave 2”. That’s not guidance but an unbreakable reality of Elliott. So in that case, the entire adventure from February 19 down to the March 22 low was a lower degree correction to the higher degree uptrend that has been with us for eight decades.

What about my trades? No options are in my account at present. My shares in SDS profit when the S&P 500 goes down and loses when it rises.