What does it mean? The correction that began March 22 is still under way, having risen 879.50 points in 58 days. 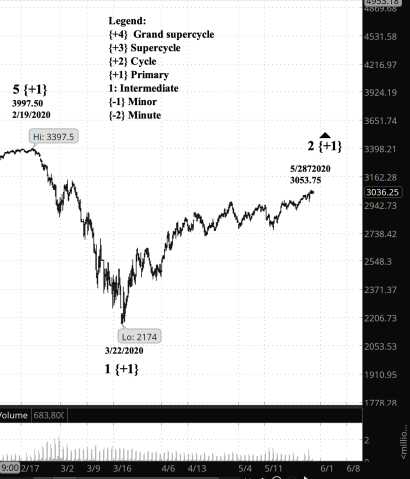 What does Elliott wave theory say? The S&P 500 is in the 2nd wave upward correction of Primary degree within a 1st wave downward trend of Cycle. The rise last night means that among the options proposed in yesterday’s analysis for the subwaves of Primary 2 — 3rd wave or 5th wave — the 3rd wave hypothesis won.

What is the alternative? A move above 3997.50, the beginning of Cycle wave 1, would invalidate idea that the entire decline since February 19 is the beginning of a correction at degrees greater than Cycle.

What about my trades? No options are in my account at present. I’m waiting for Primary wave 3 to begin before entering. My shares in SDS profit when the S&P 500 goes down and loses when it rises. They are presently losing but since shares have no expiration so I intend to hold them through Primary 3.