What’s happening now? The S&P 500 E-mini futures this morning did a repeat of Monday, moving back above the previous high. The new high is 3233.25, seven points higher.

What does it mean? The correction that began July 15 is still underway. It will be followed by a sharp decline. 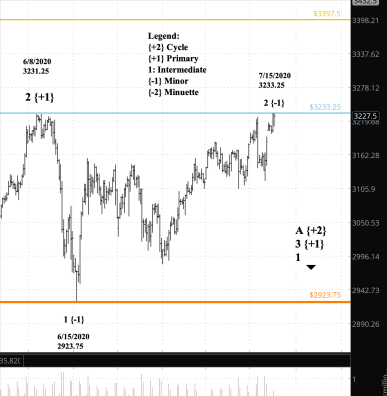 What does Elliott wave theory say? The fresh breakout means that Minor wave 2, an upward correction, is still in force. It has completed two Zigzags of the Minuette degree, one level down from Minor. The continuation of the correction means that there will be at a minimum three more Minuette waves. Their duration varies, but so far that lower degree’s waves have taken anywhere from one to 10 days to run their course.

However, the futures also moved above the peak of June 8, the June 8 peak of Primary wave 2, which is two degrees above the Minor level. That point is also the start of Minor wave 1, and wave 2 under Elliott’s rules cannot move beyond the start of wave 1. It would require a significant reworking of my analysis. But is it a true signal?

As I noted in last Saturday’s post, “A Funny Thing Happened“, the S&P 500 is a family of products, and sometimes they diverge. They major three are the index itself, the exchange-traded fund SPY and the E-mini futures. I track the futures in my daily analysis because they provide a lot of after-hours trading and so my chart avoids the annoying gaps that we see, especially, in the index itself, which trades only during market hours.

The S&P 500 index and SPY didn’t  break above the Primary wave 2 level. So I consider that aspect of the breakout to be too close to call. Ultimately I need agreement among all three of the major products before accepting a breakout to be a true signal. The vote now is one in favor a breakout, two against.

What is the alternative?  Any analysis of alternatives relies on whether the breakout above the start of Minor wave 1 was a true signal.

What about my trades? Holding my shares, deferring options plays.